I post many negative honest things. I can’t help it. After losing a child, you’re quickly engulfed in a shitstorm of devastation and anger among other emotions. And, to make matters worse, so many don’t understand child loss or grief, so you’re also subjected to others’ insensitive words or actions.

It’s as though tributes from The Hunger Games are launching daggers at you, some of which you manage to dodge (barely), while others pierce straight through your heart. Except there’s no hovercraft to reach down, scoop up your carcass, and carry it off into the sunset. Because you keep surviving. And, sadly, you’re forced to carry on.

And then there’s those who not only prefer to forget your child, they prefer YOU forget your child. Because the mere thought of your dead child makes them uncomfortable. And heaven forbid they’re forced to confront some scary realities about life.

So they pretend nothing happened. They even cringe when you mention your child’s name. Which is more like being hit with an axe than with a dagger. And it makes you worry that, someday, you’ll be the only one who remembers your child and speaks his/her name.

You can’t predict the direction from which daggers and axes will fly. They could come from anywhere, even expected allies – family and close friends. These cut extra deep.

But, hopefully, there’s some good to counteract the bad – some miracle medicine (in vials, attached to small parachutes, dropped by the Capitol) to partially heal your gaping wounds. Hopefully some allow you to grieve in your time and in their presence. Hopefully some continue to speak your child’s name or listen compassionately as you speak it.

Or, maybe, a rare-type-of-someone does something so jaw-droppingly kind and moving that it brings you to your knees, reduces you to tears, renders you speechless, and takes your breath away. And possibly causes even the most avid Chicken Soup for the Soul (is that still a thing?)-reading, sappy-story-loving bystander to vomit into the nearest trashcan.

I’m lucky to know a few of these rare-type-of-someones. One is Matthew’s aunt, Kathryn (Mark’s sister).

Kathryn’s a special person with a heart made of gold. We’re extraordinarily lucky to have her in our lives. And boy is Matthew lucky to have her as his aunt. I’m sure, if Matthew’s looking down, he’s extremely proud of Kathryn and touched by all she’s done for him.

Kathryn lives several hours away but happened to be visiting when Matthew died. She was, I believe, the first person I saw, besides Mark, after I awoke from my emergency C-section and learned Matthew’s fate. She witnessed all the carnage of these first moments.

And she was touched by Matthew’s short life.

So much so that shortly after Matthew died, Kathryn began brainstorming ideas about how she could honor Matthew’s memory and help bring awareness to the stillbirth cause.

Kathryn’s done a great job with everything thus far, so I know the event will be a success. I’d talk more about it, but, if you’re interested, you can read more about it here. (Can I quickly point out how happy I am that the linked article decimates the lightning strike analogy?)

Kathryn has worked so hard and has already done so much to raise awareness in her area. The linked article appeared in last Sunday’s issue of the Grand Island Independent newspaper – on the front page! 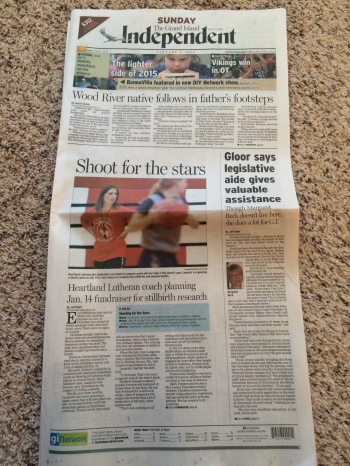 And Kathryn’s also managed to get the event publicized by a local news station. And the story was even picked up by other area news stations, including ones in Seward and Lincoln.

Talk about making an impact!

I know stillbirth is an uncomfortable topic. But it affects FAR more than most know. And research and awareness and education surrounding the issue is SEVERELY lacking.

Not only do I admire Kathryn’s talent in the areas of both dreaming up and executing this event, I’m also a bit jealous of her ability to live so boldly – that she didn’t let the uncomfortable nature of this topic stop her from making a difference.

And I’m also so touched Kathryn’s doing this as someone who isn’t Matthew’s parent. So often it’s ONLY parents who do ANYTHING to remember children who lived for such a short time.

So, Kathryn, from the bottom of our hearts, thank you!!! Mark and I, and Matthew, are so honored by all you’ve done. We love you, and we wish there were more people like you!

22 thoughts on “A heart made of gold”