Tomorrow’s our wedding anniversary. It’s been nine years. NINE YEARS. Nine years is almost ten years – a decade. I don’t even know how this is possible. When we married, I was almost 23, and Mark had just turned 22. We were babies.

It’s difficult for me to look back at our wedding photos (or any of our photos pre-tragedy). I can’t help but feel sorry for the couple in the photos, blind to the horrors that await them. Mark doesn’t admit it, but it’s difficult for him too. The other day, a song from our wedding played over the speakers in our house, and Mark broke down and hugged me on the couch as we both cried hysterically. Although we have a lot to be thankful for, we didn’t expect our lives to look like this – we didn’t expect to bury a child. No one does.

So much has changed in nine years…

Our ring bearers (Mark’s cousins) now dwarf us, even though the oldest one is only a freshman in high school. 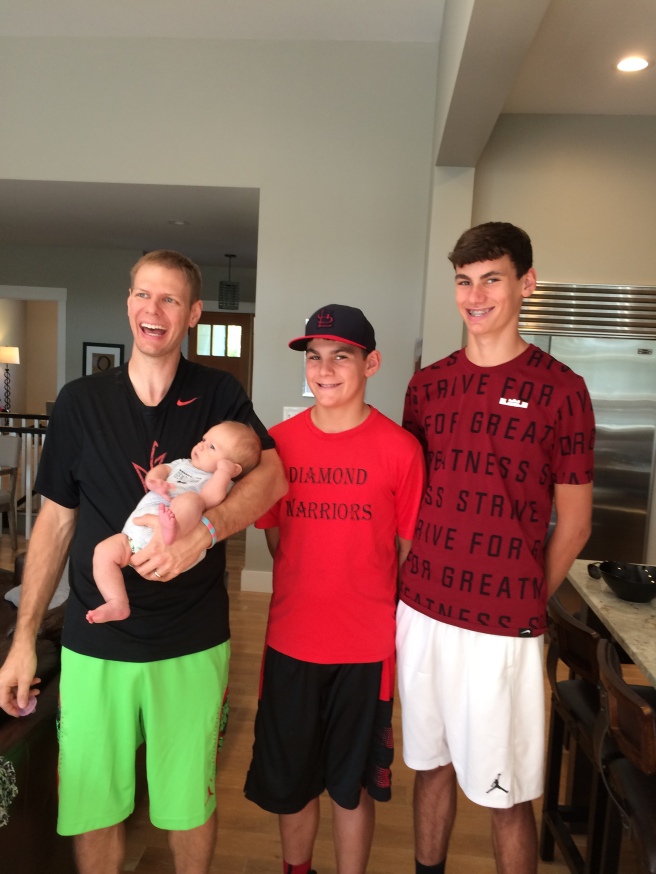 We’ve weathered job loss and building a home together (a self-inflicted struggle, to be fair).

We’ve said goodbye to two grandmothers and a beloved uncle. This year, a treasured friend of Mark’s family died from injuries she sustained in a fall from a ladder. There might have been even more casualties in nine years – I apologize if I’ve missed mentioning someone.

We’ve traveled and built careers and expanded our family. We’ve dreamed, fulfilled dreams, and watched everything come crashing down. Though we’re still very much heartbroken, we’ve worked to rebuild our lives (to the extent possible) and have occasionally dared to dream again.

We’ve grieved together, but sometimes we’ve grieved differently. I’ve begged Mark to be patient with me. He’s begged me to keep hanging on. “As long as I’m alive and Joel’s alive, you have reason to be here,” he often reminds me.

I don’t remember much from our wedding day, because it’s been NINE YEARS. But I have some random memories… It was an uncharacteristically warm day for December. We had some wardrobe malfunctions – my train was flipped over as I walked down the aisle, and this ruined some of our pictures, and Mark and his groomsmen wore shirts made for bow ties, even though they actually wore regular ties (the tux rental place screwed up). The church where we married had just “updated” it’s flooring with this ugly blue tile that made it look more like an elementary school gym than a church, and it pissed me off so much. None of my bridesmaids wore any underwear whatsoever. Some of our guests brought their foreign exchange students without telling us they planned to do so, and it created stressed out whispers over seating assignments.

Some of my favorite recollections from our wedding involve our music. We hired a string quartet to play the pre-service music including the processional (Canon in D, I think). Mark’s grandpa, an accomplished organist and pianist took over from there. (It sounds like a lot of instruments, and it kind of was, but it was a beautiful service nonetheless. I promise. With the exception of blue tile floor, of course.) I don’t remember every detail without cheating and looking at the program, but our three main songs were The Father Says I Do, I Will Be Here (Steven Curtis Chapman), and The Prayer (most famously sung by Josh Groban and Charlotte Church, or maybe Celine Dion).

Our singers were fabulous. Here’s a link to The Prayer from our wedding in case anyone is bored and wants to listen… (Several of the onlookers turn around when the female singer hits the high note – you think she can’t go higher, and then she does it, and the male singer is great too, though I’m not sure his Italian is spot on, but I give him giant props for his obvious talent with making up some of it on the fly.)

I will be here
And you can cry on my shoulder
When the mirror tells us we’re older
I will hold you
And I will be here
To watch you grow in beauty
And tell you all the things you are to me
I will be here, hmmm

We aren’t the same people we each married nine years ago. Though Matthew’s death has in no way strengthened our relationship, we’re making it… We’ve tested the outer limits of “for better or for worse,” and despite everything we agree that there’s no one else in this world we’d rather do life with, which is a big deal.

But a few things remain constant – we’re still each other’s biggest cheerleaders, we still make each other laugh, and we continue to be here for each other through everything – quite literally in many of the ways the above song describes.

Last year I posted our love story, which I’ve linked in case anyone is still bored and is curious and hasn’t read it yet. (The other day I accidentally disclosed the part about Mark and Kris Jenner being the same person to some of Mark’s co-workers, but he didn’t care, so it’s all good.)