When Howie was younger we took him on a float trip with friends, and it was kind of miserable, because there was some midnight puking in the tent and a long bus ride to the river, after which Howie raced off the bus and humped another dog as they ran down the shore (who knew dogs could run so fast and hump so hard at the same time), and then Howie wanted to jump out of the raft or canoe or whatever we were riding, so he was whimpering for like seven hours, and we had to restrain him, and, most notably, because we were in the sticks of Missouri, apparently no one had ever seen a golden doodle before, so about 300 inebriated people questioned us (some from hundreds of yards away), “WHAT KIND OF DOG IS SHE?!?!” (One would have thunk we were floating down the river with a fucking Siberian tiger.)

And this is one reason Howie still has his balls, because everyone thinks he is a she, and Mark can’t really stand the thought of making Howie even less masculine. So everyone thinks it’s strange that he isn’t neutered, especially my mom, who’s always like, “Eeeee… You guys…” But Mark insists that Howie’s testosterone is what makes him so healthy and why he, unlike most dogs his age (eight), doesn’t have fatty tumors all over his body. And I have to agree that he doesn’t have tumors, though it can be embarrassing to have Howie hump Mark’s boss or my friend Marie or the air.

When Howie mounts our houseguests, Mark usually blames them like, “He never does this. What kind of fragrance are you wearing? Howie reacts strangely to fragrances.” And I just shake my head and remind Mark it’s never too late for us to neuter Howie, but then Mark points out that my parents’ dog is spayed, and she humps everything too, so I usually just concede that a scrotal ablation isn’t in Howie’s future.

Last Saturday we had record warm temperatures for January, so we took Joel and Howie to a local state park where there’s some good hiking up a steep hill and then down a hill and then alongside a river. It was a place we walked frequently after Matthew died, so it was different to be back there with Joel.

Mark and I did a bit of a gender role reversal in that Mark wore Joel on our hike, and I walked Howie, so Mark got a bunch of comments like, “Oh YOU have the baby, and SHE has the dog.” And Howie is 60 pounds of pure muscle, so he almost pulled me into the river several times, so I was cursing, and bystanders were laughing at me, and our walk took like two hours longer than it should have.

We dressed Joel in a super cute outfit and some sunglasses, so my mama heart swelled with pride each time someone approached us like, “OMG – sooooo adorable – the most gorgeous thing I’ve ever seen in my life!!!” And I’d smile so big and blush, and then I’d start to be like, “Oh thank you.” But then these people would reach for Howie, and it was so reminiscent of the freaking float trip back in day, but it was nice for Howie to receive some attention, as he’s really been second fiddle lately…

Howie was only with us for about a week after we brought Joel home from the hospital before we shipped him (Howie, not Joel) off to Iowa to live in the cornfields with Mark’s parents and his “Uncle Max” (Mark’s parents’ dog), because I was freaking stressed out and anxious.

Howie visited for Thanksgiving and returned home shortly before Christmas, and now he’s here to stay.

Joel watches Howie’s every move and also laughs at him and shrieks at him and reaches for him. Joel pulled his hair once, and Howie seemed pretty annoyed… He kind of snapped (no one was injured), which worried me, so now we have to keep them a healthy distance from each other and watch Howie closely.

Howie seems a bit sad and confused that are so many toys in the house that aren’t his. He got his paws on one of Joel’s toys and tried to bury it in the backyard, and he’s destroyed a couple of Joel’s toys too.

Howie’s still a water dog, so during bath time, we have to put Howie’s shock collar on… We don’t actually shock him, but we vibrate him if he tries to get into the water. Howie’s also field trained to hunt, and I think Howie thinks that Joel’s rubber duckies are real ducks for him to try to kill, which also necessitates the collar.

Howie also made me nervous one of the first nights he was home. He would come into our bedroom and sniff at Joel’s crib for a little bit too long, and it made me think he’d come and try to eat Joel in the night or something. But in hindsight, I think he was just trying to familiarize himself with Joel’s smell, and I think he’s actually protective of Joel and has an understanding that he’s part of the family and really important to us.

Today we let Howie lick Joel’s arm (under intense supervision), and Joel LOVED it, so I think the relationship between them could be warming up. Hopefully it will become more reciprocal and mutual, as opposed to Joel interacting with him only to get no response, which can’t be good for social skill development. Of course we’ll have to continue to monitor it closely.

In Howie’s younger years, he was so important to us. When I was pregnant with Matthew we had all these visions of grandeur about how their relationship would be. When we returned home from the hospital without Matthew, we wished out loud that Howie would have died instead. Obviously we didn’t want either one of them to die, but we were going through a bargaining phase. Eventually, we became thankful for Howie again – he’d cuddle up in bed with me as I cried. He’s taken a backseat as we become acclimated to parenting a living child, but now that this is a bit less stressful than it was in the earliest months, I’m hoping we can devote some more attention to making Howie feel more loved and that he’ll become more comfortable with his place in our family and that it will be the beginning of a beautiful friendship between Howie and Joel.

Howie sometimes chews off pieces of his fur, and then only the golden retriever hair grows back, which is weird, and this morning Mark noticed that Howie had chewed off some fur next to his asshole, and Mark, with so much disappointment in his voice, was like, “Awwwww… He’s like totally ruined it.” And I was like, “Ruined his asshole?” And Mark was like, “It’s because he won’t poop – he licks his butt.” And it made be chuckle, because I couldn’t believe Mark was so disturbed at the notion that Howie could “ruin his asshole,” and I wasn’t aware that an asshole could be “ruined,” but I guess maybe it can be if the surrounding fur is chewed off. 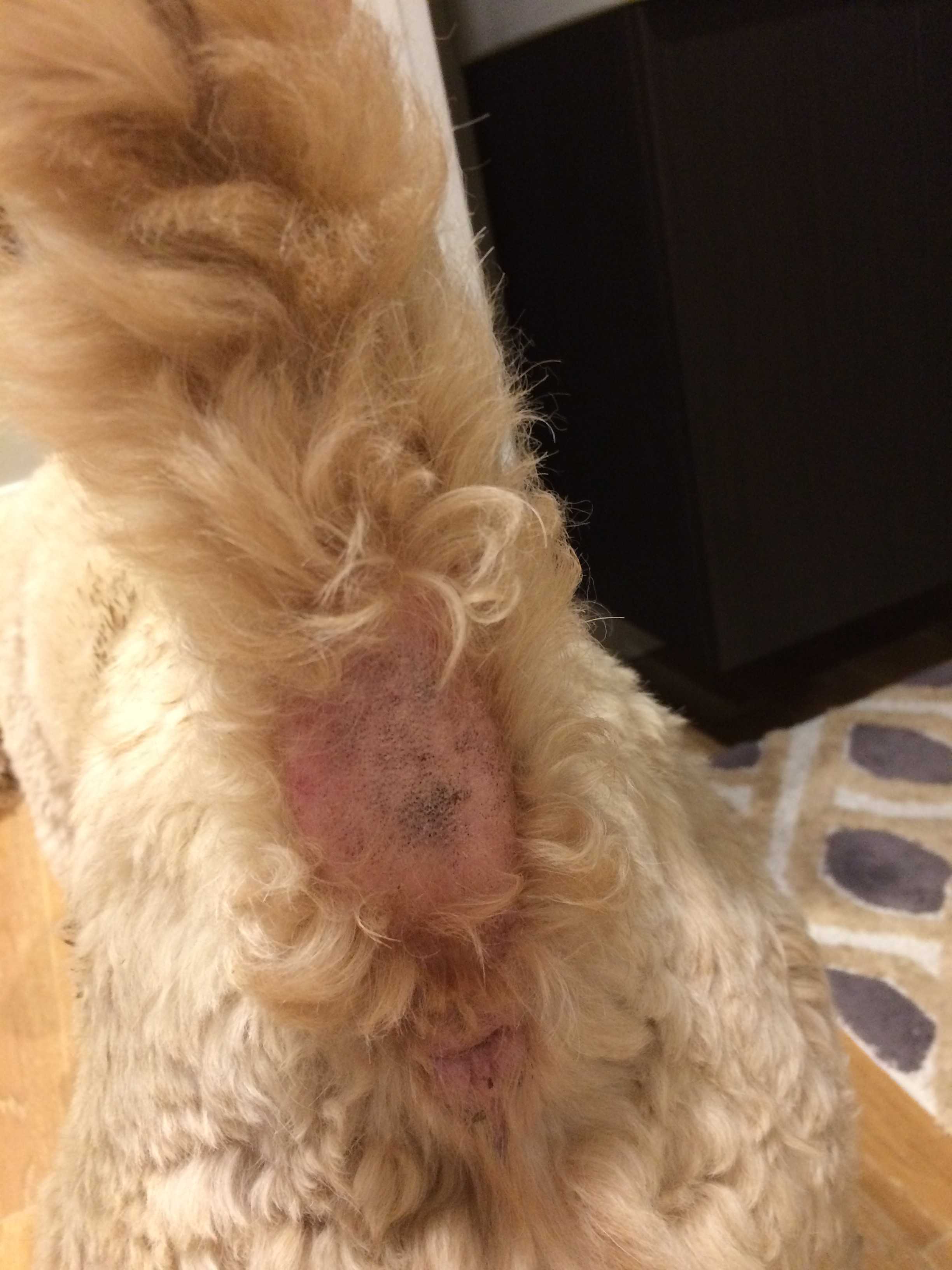 9 thoughts on “On Joel and Howie”