Sometimes I don’t follow through… If life is a nutsack, I’ve left some blue balls in my wake for sure.

A while ago I posted about how every time I entered Matthew/Joel’s room I basically just wanted to curl up and die. And, of course, I never circled back to update on the situation. Until now.

So shortly after I posted, my baby loss mom friend, Brooke, so amazingly offered to come help me get Matthew’s/Joel’s room in order. She helped organize things and decide what to keep and what to donate and made suggestions on best use of space – she basically did almost everything while I just kind of sat there and cried and held Joel, who remained awake for like 11 straight hours that day without napping, which was puzzling…

But anyway, Brooke said she wanted to help create a space that would honor both Matthew and Joel, and I think we achieved it, and I couldn’t be more grateful for her friendship, and it was beyond generous of her to give up her Sunday afternoon to help do what felt like the impossible. And now it seems, after putting some final touches on the room, the mission has been accomplished, as I can now enter Matthew’s/Joel’s room without dissolving into a puddle of tears. (Now I just dissolve into a puddle of tears at random spots throughout the house, like in the bathtub or the middle of the living room floor. It’s far less predictable.)

Joel hasn’t actually moved into his room yet, but perhaps he will soon.

Below are some pictures of the final product… 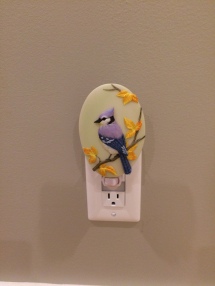 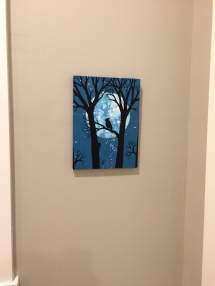 The rainbow picture above is from Brooke. (Again, WAYYYYY behind on thank you notes – thanks, Brooke!) And the blue jay nightlight and artwork are both from Mark’s parents. The painting was done specifically for Matthew’s/Joel’s room by a New Orleans street artist.

“The room” is a big deal. I hear/see so many baby loss moms ask about it in support groups or in online forums. I shut the door to Matthew’s/Joel’s room pretty soon after Matthew died, and I didn’t open it until after Joel was born. I didn’t buy much of anything prior to Joel’s arrival. (We hit “order” on Amazon on a few thousand dollars worth of baby items AFTER he was born.) I was scared to hope, but mostly I just couldn’t deal. Some are the opposite – they want to decorate the room as a way to bond with their baby and as an expression of hope.

There is no right or wrong way or a rule book for how to handle such impossibly difficult situations. So I think people should just do whatever feels right in the moment.